My food presentation and photography skills leave much to be desired.  You’ll probably agree with me after you see this picture: 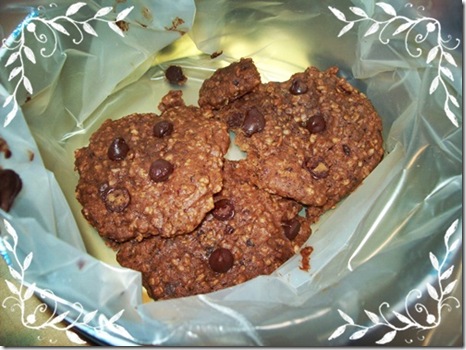 Let’s forget about my photography skills in the meantime and focus instead on the cookies.

I was never a cookie lover in my younger days and not once did I feel the urge to make them.  I didn’t grow up like most 5 or 6 year olds who say, "mummy, mummy, can I help you make cookies", and then they turn the kitchen into a war zone when they’re done.  No, the kitchen was not a place to hang out.  When my mother would start puttering about with her pots and pans, I’d run away and hide, fearful that she’d ask me to help her.

But people change.  Here I am – 4 decades later – discovering the joys of the kitchen.  And these cookies – I lust after them.  These are the only cookies that stir my five senses and sensuality.  A carnal affection – if we can say that about cookies.

I have made them four times now.  They’re called – rather simply – chocolate oat cookies.  The first three times I made them, they exhibited "cookie spread" disease.  I would start with small mounds of cookie batter on the sheet, and exactly 9 minutes later end up with huge flat pancakes.  No matter though, they were still delicious, soft and chewy, and…un-sugary.  The best cookies I’ve ever had – that’s why I don’t buy the commercial variety anymore.  These are top of the line, folks.  On a scale of 1 to 10 with 10 being the best, I’d give taste and texture a 12!

Back to cookie spread – before I made them last week, I was curious about how to prevent them from spreading.  I did a quick search on the Net and learned that there are at least 4 ways you can avoid cookie spread:

I like butter in baked foods so the first option was out.  I don’t buy shortening either.  I chose option # 4:  refrigeration.  I scooped individual mounds onto the cookie sheet, covered them with aluminum foil and then put them in the fridge for 45 minutes.  I took them out just as I was starting to pre-heat the oven.  I said to myself, if this will prevent the cookies from spreading, that’s good but…will I lose that delicious taste and texture?

Result:  it worked!  The cookies did not spread out – not even by a millimeter. And the best part – they had the same delicious flavor!

I’m not going to post the recipe – not because it’s a secret.  But I’m sure you all have a dearly beloved chocolate chip cookie recipe in your stash. Either grandma or the village baker gave it to you, or you clipped it from the back of a product label.  Chocolate chip cookie recipes are a-plenty.  I have no doubt that each baker believes his or hers is the BEST.  Posting a chocolate chip recipe here would be like blogging about something inane, talking about something that everyone has read umpteen times.  This is why even if I say these cookies are the "mostest", the best of the best, and the kind that the devil would try to snatch away from the angels, I know that you would say the same thing about your recipe.  But if you’ve been won over by my sales upmanship and you want it, just ask.  Email me at ques2008@gmail.com

These chocolate oat cookies practically melt in your mouth and they don’t clog your throat with sugar.  I think I’ll make extras next time and give them away.  Once they wake up your taste buds, you won’t want the supermarket kind…ever again. 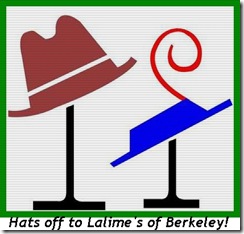 My sister and her hubby are in Berkeley (CA) for the summer to tidy up their house for the next tenants from the university.  They bought a fixer-upper about four years ago and it still needs a lot of work.  Living full time in the east coast, summer’s the only time they can roll up their sleeves and get “down to the gutters” and continue with the upgrades to their Berkeley house.

I was going to mail a pair of bermuda shorts to my sister for her birthday last week but thought, hmm, this must be the umpteenth pair of bermudas I’m giving her and I’m sure she hasn’t gotten around to wearing the last pair I sent…use your imagination!

Decision:  my birthday gift will be dinner out at a French restaurant.  I am aware that they love ethnic food, but I figured that when they’re back east, they can go to all the ethnic digs they like.

Google gave me several options in the Berkeley area but I decided on Lalime’s for two reasons:  they had just re-modeled the restaurant and were opening on the 11th of July.  Second reason was exceptional customer service.  I spoke to Ali Wagner of the restaurant and she said they would mail the gift certificate on Saturday.  My sister actually got it that day which means they made an effort to mail it a day earlier.

So what’s Lalime’s like?  These keywords should give you an idea, but visit the links I provided as well:

Hats off to Lalime’s!  My sister and hubby enjoyed their meal and my brother-in- law said, looks like you did some good research there.  Actually, no.  But I must say search engines like Google did their algorithm, spybot crawling and indexing tasks to a T!

My thanks to Ari Wagner who made my sister’s birthday celebration with her favorite person/husband/friend a delightful experience.  Their friendly waiter Aaron said they work hard at Lalime’s to be as good, if not better, than Chez Panisse, also an organic-themed Berkeley restaurant – their main competitor.

PS:  you’ll have to forgive the blurry quality of the photos above.  How do you expect intoxicated diners to hold their camera with a steady hand? 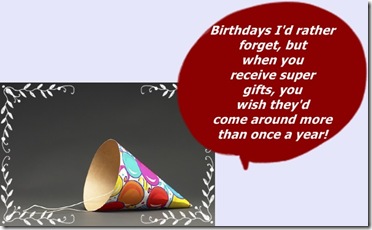 It  pays to brag about your kitchen “victories.”

I’ve been talking ad nauseam to my sister and close friends about how I made this bread or how successful a recipe turned out.  Now they’re convinced it isn’t just a passing fancy.  For once, they’re taking me seriously; last week they decided to celebrate my birthday by giving me gifts to adorn my kitchen.

From my sister Sheila I received a generous gift certificate to City Chef, an online retailer based in British Columbia.  I had fun browsing their product line – a nifty assortment of cookware, bake ware, small  gadgets, major appliances, world cuisine accessories, birthday ideas and their most recent arrivals.

City Chef’s staff are courteous and they processed my order efficiently.  My online shopping experience with them was as smooth as the texture of my chocolate roll.  They said it would take five business days for my package to arrive so that meant the Friday of the following week.  My package arrived on Tuesday morning (three days early).

So you’re asking, what did I order?

The box was packed well.  The best surprise was that each of the items I ordered was  excellent quality.  The fluted cake pan was heavy and thick, not the kind that feels like it would break or disfigure when dropped.  The Cuisinart immersion blender was solid to the touch – it feels like driving a Porsche compared to other cars.  The cookie cutters will of course replace my cheapo collection from the dollar store. 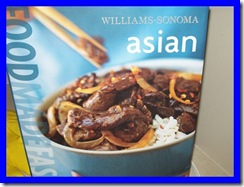 From my friend Anne, I received a Williams-Sonoma book of Asian recipes.  I told her I was familiar with the fine reputation of Williams-Sonoma.  She never heard of them actually; she was delighted when I told her that anything bought at Williams-Sonoma was sure to please any kitchen diehard.  I bet she Googled them as soon as she got home because Anne is one person who loves to shop – whether it’s for lawn fertilizer, toilet vanity sets, sunglasses (of which she has hundreds) or cooking ware (she’s also a much more refined cook than I am, having learned some of her kitchen skills from her mother).

I’ve prepared a slide of my sister’s gifts, my way of thanking her for the generous gift certificate that allowed me to shop till I dropped!  Here it is.

For those who live in Canada, City Chef won’t break your heart…or your purse!  Give them a try the next time you’re looking for a new pan or a “treat myself” gadget.

Forbes Helps Itself in the Kitchen June 4, 2009

Private citizens whip something special in their kitchens with the oven light on vigil and their adoring five-year old staring at the freshly-baked crumble.  Hubby and children who gather around the table eager to sink their teeth into mom’s masterpiece give her – at least for a few fleeting moments – that “star” feeling.  No doubt it fades quickly as soon as it’s time to clean up.

Imagine what it’s like for the lucky ones who love cooking and get paid for doing what they enjoy.  Ah, to be a famous chef! It’s not the oven light anymore, it’s a cluster of TV spotlights and a kitchen equipped with accoutrements deserving of world attention. And instead of admiration from a five-year old, a famous chef commands the attention of young and old, all of them ravenous.

Well done indeed.  Last August, Forbes came out with the top ten earners in the kitchen.  Number 1 slot went to wholesome and gifted Rachel Ray.  As Forbes put it, she certainly knows “how to build a brand.”  Dunkin Donuts must be thrilled.  She loves their donuts. Ray is worth a cool US$18 million a year.

A close second is Wolfgang Puck of Spago fame coming in at $16 million.  The top-10 list of Forbes’ writer Chaniga Vorasarun has two women and eight men.  You can read the article here:  http://www.forbes.com/2008/08/08/celebrity-chef-earners-forbeslife-cx_cv_0808food.html.

Question:  who is the chef known for his fiery temper and unforgiving nature in the kitchen?